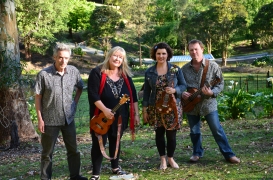 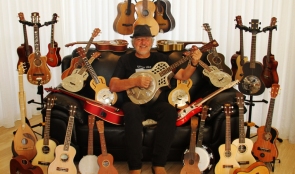 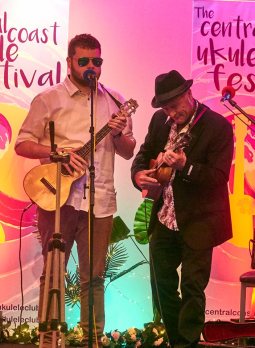 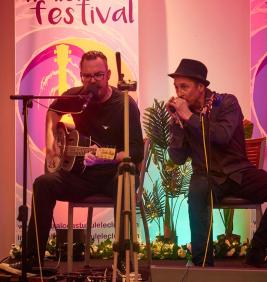 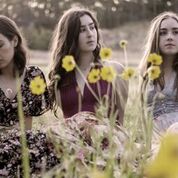 With just over 5 weeks to go for our wonderful Central Coast Ukulele and Folk Festival 2019 our program is just about ready and we are excited to present to you a fabulous festival in 2019.

All our performers are ready and waiting and all our main acts are pumped.

Limited seats available for dinner show so book your seats and table for a fantastic evening of live entertainment and a yummy meal. Call Diggers on 4332 3399 to book your table.

After selling out their 2018-19 Adelaide Fringe season and European tours, The Squad returns to the Central Coast Ukulele and Folk Festival 2019

The Squad will offer Ukulele enthusiasts everything their nylon string hearts desire. The Squad are set to get more intimate at their workshop on Saturday afternoon and Saturday night The Squad are set to shake up the Ukulele world again with Fifty Shades Of Uke. It’s time to dust off your best leathers as the world’s most dangerous Ukulele show  will be Toe-tappingly dangerous. The Death Squad take 4 strings to a new and excitingly mind-blowing level.

The wild half of the Uke Death Squad, Julian powers through shows with a husky voice, and the raw energy of a labrador on speed.  Having hit the music scene as the front man of global indie-folk band “The Coconut Kids”, he lets rip with his husky vocals and mad strums to create a unique sound that sits perfectly with Ben’s fast moving riffs. Yes, he’s been known to snap Ukuleles on stage.

Benjamin Roberts came up with concept of The Ukulele Death Squad late at night while strumming his Banjolele deep into the wee hours of the morning. A guitar virtuoso having toured nationally with acclaimed Aussie folk band “The Timbers”, Ben puts the guitar aside and shows some serious Technical prowess on its four-stringed cousin. He’s the lead uke maestro of this duo.

His name is Eamonn Burke, the beast with the bass, we don’t let him have a mic very often, and for good reason. With his rough Irish accent and crooning singing voice of a Viking prince, he would steal the lime light. Don’t fool by his short stature, this little man drives the beat with his tiny instrument and holds the band together.

Reuben Legge is an accomplished Jazz saxophonist, keyboard player and percussionist having completed his degree in Jazz and improvisation at the University of Melbourne.Reuben has played alongside and toured with many well known artists including Ollie McGill (The CatEmpire), The Teskey Brothers, Senegambian Jazz Band and more recently he’s been writing and touring with the Ukulele Death Squad.

It is said that something special happens when family members sing together. Central Coast trio Little Quirks are doing a lot to substantiate that theory. Sisters Abbey and Mia Toole joined their cousin Jaymi Toole in 2015 to form Little Quirks, a band in which they simply wanted to “write and play music that was fun to sing”. And listening to their lively brand of folk pop, it’s hard not to sing along with them.

Music was always a big part of life for the three girls who grew up not far from each other in regional NSW. They were literally surrounded by musical instruments from the start. Both parents and grandparents played in bands through the 70’s and 80’s, their uncle is the school music teacher, and a hit-laden record collection sat formatively on the shelf (everything from Led Zeppelin to Taylor Swift) so it’s not surprising at all that Abbey, Jaymi and Mia developed an early knack for writing a great hook. Having spent many an afternoon strumming songs al fresco on the veranda, the transition into a fully-fledged band was an easy one.

From busking at farmers markets they quickly leap frogged onto stages supporting the likes of Tim Rogers, All Our Exes Live in Texas, Alex the Astronaut, Jack River, Busby Marou, and Xavier Rudd. Their live show is staggeringly energetic for a young folk band. It moves from epic to sweet in a heartbeat drawing comparisons to the likes of Mumford And Sons, The Lumineers and First Aid Kit. The three work together in a lively fashion with drummer Mia pounding a relentless beat behind the rhythmic of strums and sways of Jaymi (mandolin/vocals) and Abbey (guitar/vocals). All three singing in blissful harmony.

Formed in late 2010 by guitarist Hayden Maskey and blues harpist Paul Rubie, Johnny Devilseed & “Old Man Rubes” have been doin’ the rounds about towns, constantly blowin’ the doors off venues, every time they perform.
With a huge repertoire of original songs ranging from the old timey era to the modern blues of today, their shows have been described by many as a, “full on, hardcore, foot to the floor, theatrical blues extravaganza!”

In March 2014, the blues duo released their debut EP “John the Revelator” to much critical acclaim and with the recent release of their latest E.P “Woy Woy Bound” the Central Coast Based act is finding 2019 to be one of their busiest years yet.

Their playful interaction on stage seeps into the crowd with the help of some looped beats and basslines, this duo will have you tapping your feet and dancing from the very first number.

We are delighted to introduce you to Paul Jonson.

Paul got his first guitar for his eighth birthday and only played guitars until he was 60 when he was sent a promotional uke from a company asking if he’d be keen to sell them.
Folks describe him as a Blues Ukulele Player Extraordinaire and a blues ukulele legend, and being retired from the corporate world he travels to share ukulele magic at international festivals. He uses unique resonator ukuleles, many of which he has built in his studio where 200+ ukes reside, to express the true feeling of the original blues masters, and plans on astounding any audience with the versatility of this humble four string instrument. Featuring blues, boogie, ragtime and traditional folk songs in a concert and/or workshop format to acquaint the keen ukulele players with finger picking, alternative strumming, chording and tuning techniques that express the feeling of these styles of music. He travels widely to share his particular brand and uke style out of a love for music. He has featured at many ukulele and folk festivals in his native New Zealand, as well as Australian ukulele festivals and recent travels in Europe included ukulele gigs in Italy and Spain. His passion for 4 stringed instruments has led to running an annual NZ Four String Festival in Kawhia with the inaugural guest Canadian Manitoba Hal, whom he toured with in November 2018 as a performer. http://www.singnuke.co.nz

This amazing duo will captivate you. Connor has the voice of an angel and Shawns beautiful musicianship and regard for Connor is amazing. Shawn, an amzing musician in his own right prefers the light to shine on Connor.

Connor has a condition with his eyes known as Lebers Congenital Amaurosis, which resulted in Nystagmus uncontrolled eye movement, it’s gone from severe to mild and Connor has light perception and can recognise some movement in front of his face.

When Connor was two years old, he was playing songs that he had heard and liked on his toy piano. His parents realised that the ability to play by ear was a great gift and encouraged his playing. Later, when he was six, they set out to find a piano teacher to work with him.

By age 11, Connor had already recorded 2 CDs Sounds for Sight and Sounds for Sight: The Journey Continues at home with a 16 track mixer and sang and overdubbed own voice for backing vocals. By the time he stopped classical training, he had reached Grade 3. During this time, Connor transitioned successfully to singing, due to his ability to memorize lyrics and music combined with his acute hearing, pitch. and unique voice. For a short time, Connor dabbled with the guitar; but later, he discovered the ukulele.

He had found his place as an artist. His biggest musical influences have been the Bee Gees and Cher. He was fortunate enough to meet Cher back stage in Las Vegas in 2010, and she was gracious enough to listen to him sing. Cher also gave Connor some advice that assisted him with his audition for the performing arts high school that he still attends. Connor has also been fortunate to meet a number of other great solo artists, including Marcia Hines and John Paul Young.

Connor has been blessed with the presence of many amazing people in his life as well as the support of his local community. In appreciation, Connor spends several months a year busking for Variety The Children’s Charity. To date, he has raised, and will continue to raise, thousands of dollars, and he is excited about continuing his amazing journey.

Connor’s original songs are now available for purchase on iTunes and CD Baby.

Mirrabooka are a remarkable four-piece band of experienced musicians. Mirrabooka Band members have been involved in the music industry collectively for many decades and know how to please an audience. They have their own sound and you’ll be captivated by the awesome vocals & harmonies, the rhythmic songs and melodies of their originals catchy songs, and popular catchy covers.

This band has been performing together around the Central Coast and beyond venues plus headlining at many festivals, corporate functions, commercial and private parties, charity events, over the past 7 years. They are extremely versatile group. They are regulars at The Sails and Memorial stages at The Entrance and many of the Coast’s clubs and pubs. They are in demand for Ukulele and Folk Festivals because of their diversity in such places as Hawaii, Darwin, Cairns, New Zealand,  Central Coast Ukulele Festival, Blue Mountains and Tasmania. The band consists of two couples. The two lovely ladies share the lead vocals and harmonies, accompanied by the two guys’ rhythmic bass and solid drums and percussion adding to their catchy and unique sound and vocals. They write all their own material and original compositions. Mirrabooka are multi-instrumentalist and have a unique original sound of beautiful acoustic music made up with acoustic guitars, mandolins, ukuleles, djembe drums and bass, then throw in original songs with a great sense of humour and you have ‘Mirrabooka’. They can also set the dance floor on fire with solid upbeat dance music.

Cameron Murray has been playing and teaching the ukulele and banjo-uke
for about 25 years. A regular on the Aussie uke scene, he enjoys performing original songs, as well as classic tunes from the 1920s and ’30s. He has been
a magazine journalist for 17 years and, in 2011, decided it was time to merge
his two passions with the launch of KAMUKE Ukulele Magazine. Since then,
the magazine has gained a loyal following all over the world.

Cameron has been a crowd favourite at our festival for several years now and our workshops. The gentleman of the ukulele.

Plus these amazing groups, duos and solo..

Harmonica with Paul Rubie – Please bring a C harmonica and be ready to play the Blues with the band Saturday night.

Learn to pitch and Sing

and much more … see you there